Vatican) Two days ago, the Salesians of Don Michele De Paolis was received by Pope Francis on May 6.  The 93 years old priest concelebrated Holy Mass in the morning with the Pope in the guest house Santa Marta.  The founder and now the Honorary President of Emmaus Community in the Apulian city of Foggia  then met  for "a few minutes" with the Pope  At the end the Pope kissed  his visitor's  hand.   The scene has been a bit irritating and in itself bizarre.  What Pope  actually kisses people on the hand?

Don De Paolis and his companion gave the pontiff a chalice and a paten made of olive wood.  A friendly gesture and a gift, if not suitable, according to  prescriptions by the Church for use at Mass.  But such "little things" have never bothered Don Michele De Paolis, who also presented the Pope   his most recent book entitled: "An Inconvenient Priest" (Un prete scomodo), plus a prayer request.  Pope Francis, still not quite familiar with the Italian language, ​​unintentionally mixed up "scomodo" with "incomodo" which means "A Priest Makes the Circumstances".  What some Catholics from Puglia think is quite correct.  The real surprise, however, came at the end of the short encounter, when the Pope kissed Don De Paolis on the hand. A gesture  revealing the humility of a great man to another of the same stature," as the Left-leaning internet daily L'immediato gushed. 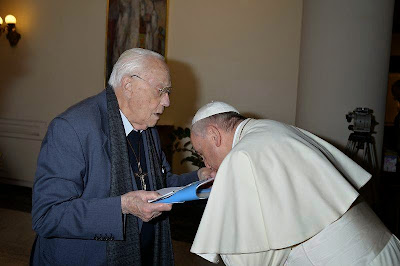 Pope Francis: "Everything is possible.   Talk to Cardinal Maradiaga "


"Don Michele" as the priest is called by all, reported on his Facebook page about the meeting with the Pope.   "I concelebrated with the Pope Francis.  I read the Gospel  After the celebration, the Pope greeted those present in another room.  We, I and my companions were the last."   "Last "," marginalized, "" marginalized ", "outcast" is  the standard vocabulary of self-understanding which is the unmistakably recognizeable in the vocabulary of the radical Left.   In fact, the contacts are very good in this direction.   Apulia is governed by professed homosexual and Communist Nichi Vendola since 2005.

De Paolis continued on his Facebook entry with what he told the pope: "We want so much for us an audience of Emmaus.   Is that possible? '  "Anything is possible.  Talk to  Cardinal Maradiaga and he shall prepare everything.'  And then (unbelievably) he kissed my hand!    I  hugged him  and wept." His emotion is understandable.   One should nevertheless beware of falling in the direction of this  lexical trap,  this anarcho-Catholicism.  It  juggles with emotional terms, while its diction is to think Marxist.  Clueless outsiders can be easily lulled  into it themselves.   The "ideological" Christianity which Pope Francis had already repeatedly criticized as  head of the Church was incarnate in the person before him. . But instead of a warning, he kissed the Southern Italian "Don Gallo" on the hand (to Don Gallo see the report Don Gallo, the Priest who Denied Almost Everything - Goes to the Grave in Scandal ).


Don Michele De Paolis is almost a cliché of   priests, who  would be expected behind the title he has chosen for his book.  The "inconvenient" priest violates the unmistakable identifying feature of rules and dogmas and floats within the Church "usually against the current."  De Paolis who came from a wealthy family  (born 1921) is described by friends as an "extremely complex" personality.  When the war ended, he entered the Salesian order, was several years in the mission to Central America, moved politically far to the left and made  liberation theology his own.   He had a  predisposition to it which he brought already from Europe.

Everything happens on an interpersonal level, from, is socially motivated, the "enemy is right" and so one never quite knows whether  there is   a priest, a social worker or a political activist before him.  Whether it is  abortion, euthanasia and homosexuality he has an "authentic answer, not hiding behind the dogmas," as it says in a review of his book.

The decisive factor is that even among his own, he just always clearly knows that he does not belong, so  one distances oneself.   Here is the "free", undogmatic, human, "true", "prophetic" do-it-yourself Church, there the dark, dogmatic, Inhuman, obsessed with gaining power official Church.  It is the adaptation of the Marxist view of the constantly angry workers against the exploitation by capital.  It is the world of the "authentic man" who is constantly angry with the "injustice" in the world.   What is "unfair", coincides again with the Marxist world view.   Any doubt is entitled, according to Don Michele and requires a response.   At the same time he adds in a dialectical circular argument: "None of us has the truth."

The secular-anti-clerical "Credo" by Don Michele

On his Facebook page, can be found his personal "Credo" of the elderly, but tireless (No pasaran) Priest:  "I feel secular, as a humble believer, always looking for a willing, unselfish, in selfless service in the Christian,community and society, on the side of the last. I feel anticlerical, that is of belonging to no caste, any category; I do not feel as an official religion.  I try to give people peace and joy that is located in the most dramatic situations of existence: infidels, unchurched, divorced, on the way to  an abortion, homosexuals,   desperate, the variety of the marginalized. Seeking the light of the Gospel in the Church on controversial issues, such as the celibacy of priests, women priests, pedophilia, disease and the end of life." Not only homosexuality, but also pedophilia?

Among the favorites of the secular anti-clerical priest is the atheist Eugenio Scalfari, who gives the path to a march outside of the Church in politics and culture on the Apennine Peninsula.

The Church's Position on Homosexuality is "Maximum Hypocrisy"


In 2010  Don Michele De Paolis founded along with "respectful atheists", homosexuals and Gabriele Scalfarotto a gay group AGeDO (Faith and Homosexuality). Scalfarotto is a "tough campaigner in the battle for the rights of LGBT people."   Don Michele is with him to fight this battle and win," said the LGBT group Christians of Palermo.   On  homosexuality and homosexuals these priests of the  left has clear ideas: "Today the Church's attitude to homosexuals is strict, inhuman and has caused much suffering by claiming that homosexuality is sin.   Some church people say, 'It is acceptable to be gay, but they must not have any relationships, they can not love each other'!    The maximum is hypocrisy.  This is like talking to a plant, and saying, you can not bloom, you may not bear fruit.'   That already is against nature!" Said the priest in an interview with the LGBT group Bethel of Genoa.

"Not Everyone in the Church Suffers from Homophobia"


Don Michele De Paolis is a "fighter against all the prejudices that must be eradicated from the minds and hearts of many people he meets along the way as a priest. That is the least that anyone can do every day, whether it is religious or not religious, says Don Michele."  And anyway, says De Paolis,  in the  "holy Church of God, not everyone is  suffering from homophobia."  Therefore, the priest wrote in an article for the LGBT group from Lecce: "Those who want   to make you 'heterosexuals', as it is called,  would be force you to act contrary to nature and to make you unhappy psychopaths.   We need to put into our heads that God our Father wants us, his children, to be happy, by making fruitful the gifts that He has placed us in our 'nature'!  (...) You have the right  to go looking for a partner.  And be quite unconcerned: where agape is, is God.   Live your love with joy.   And with our mother Church we must have patience. Her attitude to homosexuals will change.   In this sense numerous initiatives have already  been engaged. "

Danger of "Fundamentalism": "Not to Take Literally What is in The Bible"


In another essay, De Paolis wrote in connection with homosexuality: "We must liberate our thinking from a risk: fundamentalism, that is, to take literally what the Bible says. The new obedience to the gospel is free, responsible and conscious.  Instead of wasting energy in endless religious polemics, it aims to  a new Christian spirituality of joyful acceptance of yourself forming  gratitude to God, knowing that homosexual love is His gift, which is not less than the heterosexual. "

Pope Francis kissed the anarcho priest's hand. What did he mean by that?
Pubblicato da Uomo di Chiesa alle 09:29